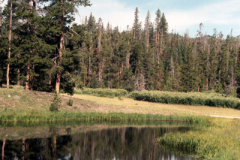 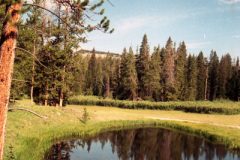 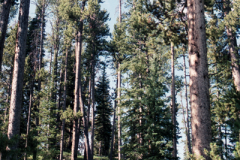 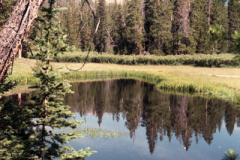 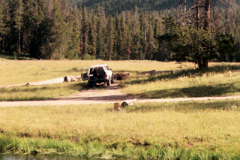 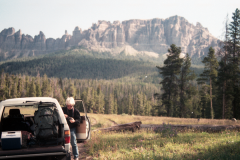 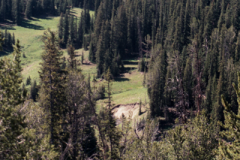 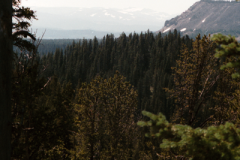 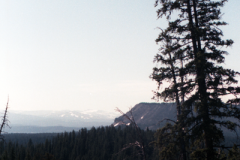 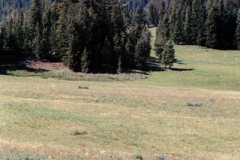 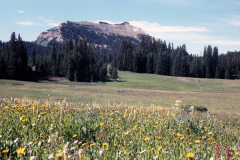 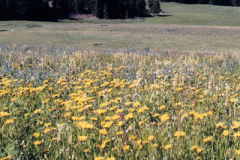 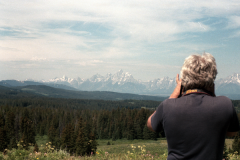 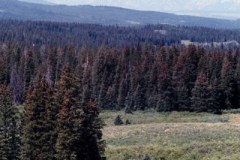 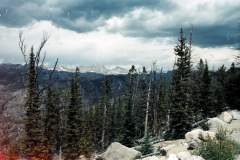 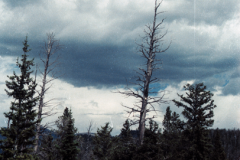 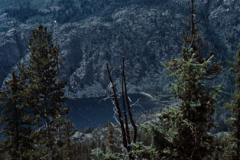 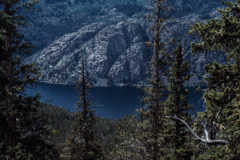 From Wikipedia, the free encyclopedia

The Wind River Range (or “Winds” for short), is a mountain range of the Rocky Mountains in western Wyoming in the United States. The range runs roughly NW-SE for approximately 100 miles (161 km). The Continental Divide follows the crest of the range and includes Gannett Peak, which at 13,804 feet (4,207 m), is the highest peak in Wyoming. There are more than 40 other named peaks in excess of 13,000 feet (3,962 m). With the exception of the Grand Teton in the Teton Range, the next 19 highest peaks in Wyoming after Gannett are also in the Winds.[1] Two large National Forests including three wilderness areas encompass most of the mountain range. Shoshone National Forest is on the eastern side of the continental divide while Bridger-Teton National Forest is on the west. Both National Forests and the entire mountain range are an integral part of the Greater Yellowstone Ecosystem. Portions of the range are also inside the Wind River Indian Reservation.

Indigenous peoples of the Great Basin, such as the Shoshones and Absarokas (Crow) Native Americans, lived in the range beginning 7000 and 9000 years ago. Villages as high as 10,000 feet in elevation, dating from 700 to 2000 BCE, have recently been studied by archaeologists. These villages were established by the Sheepeater band of Shoshone during piñon nut harvesting season. One, dubbed “High Rise”, has 60 lodges over a space of 26 acres and was recently added to the National Register of Historic Places.

One of the men from the Lewis and Clark expedition, John Colter, is thought to be the first European America person to view the range when he visited the area around 1807, though little is known about his travels through the area. In 1812, a party led by Wilson Price Hunt were the first to cross South Pass, at the southern end of the range, the pass which marked the continental divide and crest of the Rocky Mountains and became an important portion of the Oregon Trail.

Climbing was pursued in the mid to late 1800s by men such as John C. Fremont, typically for the purpose of surveying the region. Early climbers to come purely for recreation began arriving in the 1920s. Gannett Peak, the range and Wyoming’s tallest, was first climbed by Arthur Tate and Floyd Stahlnaker in 1922. Most of the early climbing in the region focused around the Titcomb Basin, slowly radiating outwards. Today, the Titcomb Basin remains one of the area’s busiest recreation attractions along with the Cirque of the Towers to the south.

The Winds are composed primarily of a granitic batholith which is granite rock formed deep under the surface of the Earth, over one billion years ago. Over hundreds of millions of years, rocks that were once covering this batholith eroded away. As the land continued to rise during the Laramide orogeny, further erosion occurred until all that remained were the granitic rocks.[4] The ice ages beginning 500,000 years ago began carving the rocks into their present shapes. Within the Winds, numerous lakes were formed by the glaciers and numerous cirques, or circular valleys, were carved out of the rocks, the most well known being the Cirque of the Towers, in the southern section of the range. Shoshone National Forest claims that there are 16 named and 140 unnamed glaciers just on the east side of the range for a total of 156, with another 27 reported by Bridger-Teton National Forest for the western slopes of the range. Several of these are the largest glaciers in the U.S. Rocky Mountains. Gannett Glacier which flows down the north slope of Gannett Peak, is the largest single glacier in the Rocky Mountains of the U.S., and is located in the Fitzpatrick Wilderness in Shoshone National Forest.

Several major rivers have headwaters on either side of the range. The Green and Big Sandy rivers drain southward from the west side of the range, while the Wind River drains eastward through the Shoshone Basin. The Green is the largest fork of the Colorado River while the Wind River, after changing its name to the Bighorn River, is the largest fork of the Yellowstone River

The Bridger Wilderness contains over 1,300 lakes. These lakes range in size from less than 3 acres (12,000 m2) to over 200 acres (0.81 km2), with an average size of about 10 acres (40,000 m2). Historically, the lakes and streams of the Bridger Wilderness were devoid of fish, as were most alpine lakes throughout the Rocky Mountains. The first known transplant of fish into the area took place in 1907 when Colorado cutthroat trout were introduced into North Fork Lake. Considerable fish stocking by individuals, the U.S. Forest Service, and the Wyoming Game & Fish Department, occurred between 1924 and 1935.

The Winds are known to have a small Grizzly Bear population, primarily in the northernmost areas. Other mammals include the black bear, elk, moose, mule deer, pronghorn, bighorn sheep, and wolverine. Bald eagles, falcons and hawks are just a few of the 300 species of birds known to inhabit the region. The streams and lakes are home to cutthroat trout, rainbow trout, brook trout, brown trout, Mackinaw Trout (Lake Trout), and Golden Trout — about 2.5 million of which were stocked by a local explorer named Finis Mitchell and his wife during the Great Depression. The forests are dominated by lodgepole pine, whitebark pine, subalpine fir, and Engelmann spruce.

The range sits alongside many of the animal migration routes in the United States and contains several important passes, notably South Pass, (7,412 ft / 2,301 m), at the south end of the range, which was one of the more important passes on the Oregon Trail as it passed through the Rockies. Aside from South Pass, which is at the southernmost tip of the range, no roads cross the mountains until Union Pass, (9,210 ft / 2,807 m) at the northern terminus of the range. There are many passes between tall peaks across the continental divide, which runs through the entire range.

The Winds are a popular recreation destination, much of which is described in Joe Kelsey’s Climbing and Hiking in the Wind River Mountains, a guidebook for the range that many consider definitive. The range’s vast wilderness areas attract many hikers, climbers and skiers. The Winds have many back country areas that see heavy use despite the relative remoteness of many of the trail-heads and the long approaches from those trail-heads to reach routes. The exposed granite in the higher elevations of the range is particularly attractive to climbers and areas such as Cirque of the Towers in the southern portion of the range are facing overuse issues as a result.[3] According to the White Pine Ski Resort website, the Winds are home to one ski area, White Pine, the only lift-accessible skiing and snowboarding in the range. Located near Pinedale, it is the oldest ski area in Wyoming.

→ In “The Winds,” just as tall as their much-photographed neighbors, but with bigger glaciers and no camping quotas
← Out Grand Teton National Park’s rows of packed campsites in every major canyon

In a range renowned for its incredible peaks-to-people ratio, we’ve scouted the loneliest route of all, in a swath of wild country where lakes sparkle in deep, granite-walled valleys hard up against the rock and ice of the Continental Divide. Begin a loop of 50 miles from Meadow Lake trailhead, south of Pinedale on the west side of the Winds. It’s a hard 12 miles and 2,500 feet to Timico Lake, but the camping is “epic 360-blue-sky-and-toothy-peaks stuff,” says our well-traveled Editor-in-Chief. It’s also a grand introduction because “there are easily a half-dozen views that rank among my lifetime top 50.” From Timico on day two, follow an unofficial use trail two miles to the Divide at 11,280-foot Fall Creek Pass and continue four miles cross-country to Camp Lake—despite the name, don’t camp there. Continue a bit more than a mile to a more ideal site in the 11,000-foot-high, glacially carved valley of the Alpine Lakes, flanked by soaring peaks. From here, dayhike six miles to Alpine Lakes Pass overlooking the Knifepoint Glacier. Return to the trailhead via 10,960-foot Hay Pass and the CDT. Local knowledge Hike in early fall to avoid mosquitoes, but don’t dally. Elk season opens the third week of September, and hunters’ pack trains arrive as much as a week in advance to set up backcountry camps. Just prior to that, you’ll find peak autumn color and ideal weather before the trails become horse-crap-clodded.