Arches National Park is a U.S. National Park in eastern Utah. The park is located on the Colorado River 6 km North of Moab, Utah. It is known for preserving over 2000 natural sandstone arches, including the world-famous Delicate Arch, in addition to a variety of unique geological resources and formations. 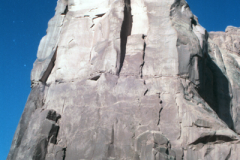 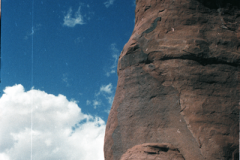 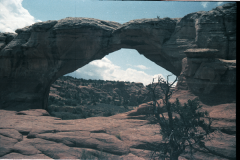 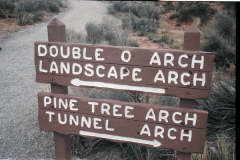 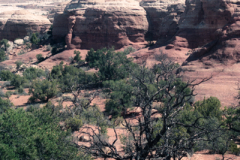 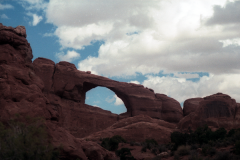 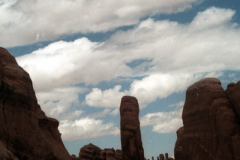 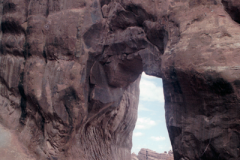 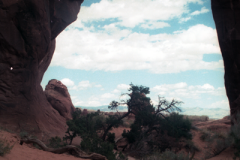 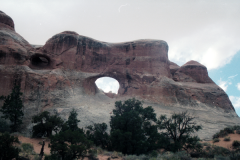 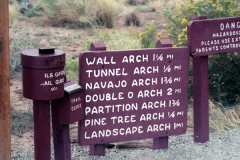 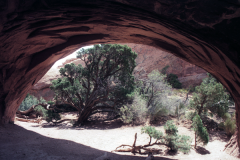 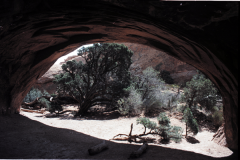 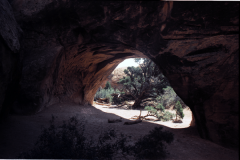 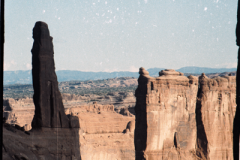 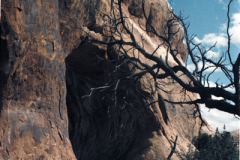 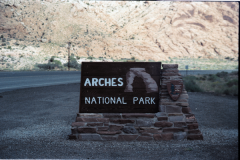 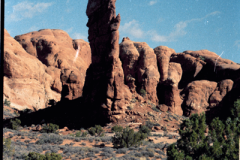 The national park lies atop an underground evaporite layer or salt bed, which is the main cause of the formation of the arches, spires, balanced rocks, sandstone fins, and eroded monoliths in the area. This salt bed is thousands of feet thick in places, and was deposited in the Paradox Basin of the Colorado Plateau some 300 million years ago when a sea flowed into the region and eventually evaporated. Over millions of years, the salt bed was covered with debris eroded from the Uncompahgre Uplift to the northeast. During the Early Jurassic (about 210 Ma) desert conditions prevailed in the region and the vast Navajo Sandstone was deposited. An additional sequence of stream laid and windblown sediments, the Entrada Sandstone (about 140 Ma), was deposited on top of the Navajo. Over 5000 feet (1500 m) of younger sediments were deposited and have been mostly eroded away. Remnants of the cover exist in the area including exposures of the Cretaceous Mancos Shale. The arches of the area are developed mostly within the Entrada formation.

The weight of this cover caused the salt bed below it to liquefy and thrust up layers of rock into salt domes. The evaporites of the area formed more unusual salt anticlines or linear regions of uplift.[5] Faulting occurred and whole sections of rock subsided into the areas between the domes. In some places, they turned almost on edge. The result of one such 2,500-foot (760 m) displacement, the Moab Fault, is seen from the visitor center.

As this subsurface movement of salt shaped the landscape, erosion removed the younger rock layers from the surface. Except for isolated remnants, the major formations visible in the park today are the salmon-colored Entrada Sandstone, in which most of the arches form, and the buff-colored Navajo Sandstone. These are visible in layer cake fashion throughout most of the park. Over time, water seeped into the surface cracks, joints, and folds of these layers. Ice formed in the fissures, expanding and putting pressure on surrounding rock, breaking off bits and pieces. Winds later cleaned out the loose particles. A series of free-standing fins remained. Wind and water attacked these fins until, in some, the cementing material gave way and chunks of rock tumbled out. Many damaged fins collapsed. Others, with the right degree of hardness and balance, survived despite their missing sections. These became the famous arches.

Although the park’s terrain appears rugged and durable, it is the exact opposite. More than 700,000 visitors each year threaten the fragile high desert ecosystem.[6] The problem lies within the soil’s crust which is composed of cyanobacteria, algae, fungi, and lichens that grows in the dusty parts of the park. Factors that make Arches National Park sensitive to visitor impact include: semiarid region, and the scarce, unpredictable rainfall, lack of deep freezing, and lack of plant litter which results in soils that have both a low resistance to, and slow recovery from, compressional forces such as foot traffic. Methods of indicating impacts on the soil are cytophobic soil crust index, measuring of water infiltration, and t-tests that are used to compare the values from the undisturbed and disturbed areas.[

Humans have occupied the region since the last ice age 10,000 years ago. Fremont people and Ancient Pueblo People lived in the area up until about 700 years ago. Spanish missionaries encountered Ute and Paiute tribes in the area when they first came through in 1775, but the first European-Americans to attempt settlement in the area were the Mormon Elk Mountain Mission in 1855, who soon abandoned the area. Ranchers, farmers, and prospectors later settled Moab in the neighboring Riverine Valley in the 1880s. Word of the beauty in the surrounding rock formations spread beyond the settlement as a possible tourist destination.

The Arches area was first brought to the attention of the National Park Service by Frank A. Wadleigh, passenger traffic manager of the Denver and Rio Grande Western Railroad. Wadleigh, accompanied by railroad photographer George L. Beam, visited the area in September 1923 at the invitation of Alexander Ringhoffer, a Hungarian-born prospector living in Salt Valley. Ringhoffer had written to the railroad in an effort to interest them in the tourist potential of a scenic area he had discovered the previous year with his two sons and a son-in-law, which he called the “Devil’s Garden” (known today as the “Klondike Bluffs”). Wadleigh was impressed by what Ringhoffer showed him, and suggested to Park Service director Stephen T. Mather that the area be made a national monument.
A panoramic view of sandstone fins of the Fiery Furnace
A panoramic view of Tower of Babel

The following year, additional support for the monument idea came from Laurence Gould, a University of Michigan graduate student (and future polar explorer) studying the geology of the nearby La Sal Mountains, who was shown the scenic area by local physician Dr. J. W. “Doc” Williams.

A succession of government investigators examined the area, in part due to confusion as to the precise location. In the process, the name “Devil’s Garden” was transposed to an area on the opposite side of Salt Valley, and Ringhoffer’s original discovery was omitted, while another area nearby, known locally as “The Windows”, was included. Designation of the area as a national monument was supported by the Park Service from 1926, but was resisted by President Calvin Coolidge’s Interior Secretary, Hubert Work. Finally in April 1929, shortly after his inauguration, President Herbert Hoover signed a presidential proclamation creating Arches National Monument, consisting of two comparatively small, disconnected sections. The purpose of the reservation under the 1906 Antiquities Act was to protect the arches, spires, balanced rocks, and other sandstone formations for their scientific and educational value. The name “Arches” was suggested by Frank Pinkely, superintendent of the Park Service’s southwestern national monuments, following a visit to the Windows section in 1925.

In late 1938, President Franklin D. Roosevelt signed a proclamation which enlarged Arches to protect additional scenic features and permit development of facilities to promote tourism. A small adjustment was made by President Dwight Eisenhower in 1960 to accommodate a new road alignment.

Climbing on named arches within the park has long been banned by park regulations. Following Dean Potter’s successful free climb on the Delicate Arch in May 2006, however, the wording of the regulations was deemed unenforceable by the park attorney. The park revised its regulations as follows in response:

The Three Gossips
Exit rapel on the popular Elephant Butte, a rock formation in the park

Climbing on other features in the park is allowed, but regulated. The revised regulations also prohibit slacklining parkwide. Approved recreational activities include auto touring, backpacking, biking, camping, and hiking, some of which require permits. Guided commercial tours and ranger programs are also available.

Astronomy is also popular in the park due to its dark skies despite the increasing light pollution from towns like Moab.

Among the notable features of the park are:

* Balanced Rock – a large balancing rock, the size of three school buses
* Courthouse Towers – a collection of tall stone columns
* Dark Angel – a free-standing 150-foot (46 m) tall sandstone pillar at the end of the Devil’s Garden Trail
* Delicate Arch – a lone-standing arch which has become a symbol of Utah and the most recognized arch in the park
* Devil’s Garden or The Klondike Bluffs – with many arches and columns scattered along a ridge
* Double Arch – two arches that share a common end
* Fiery Furnace – an area of maze-like narrow passages and tall rock columns (see biblical reference Fiery Furnace)
* Landscape Arch – a very thin and long arch with a span of 290 feet (88 m) (This is the longest arch in the park)
* Petrified dunes – petrified remnants of sand dunes blown from the ancient lakes that covered the area
* Wall Arch – located along the popular Devil’s Garden Trail; collapsed sometime on August 4/5, 2008