This park has been called “The Bryce Canyon of Texas” by those who have seen the actual Bryce. True the colors here are red but this is unique after that. Palo Duro is not a high altitude place built by snow and ice. That makes a lot of difference. The wiki will tell the rest of the facts. Due to its proximity to Amarillo, TX, it is quite heavily touristed. The state site for this park is at http://www.tpwd.state.tx.us/state-parks/palo-duro-canyon. Another site is http://www.palodurocanyon.com/. The Wild Texas Parks site is also a good source of information. 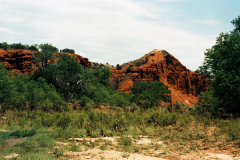 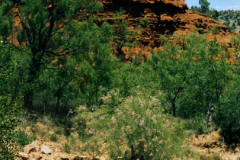 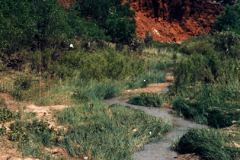 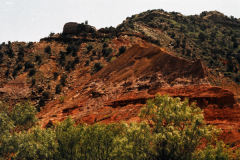 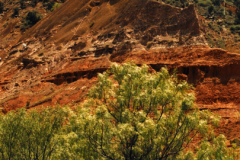 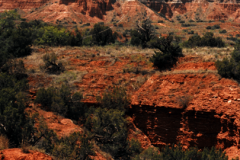 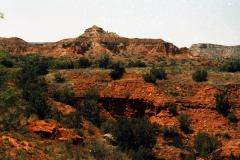 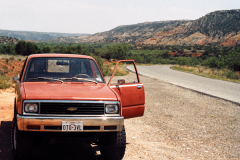 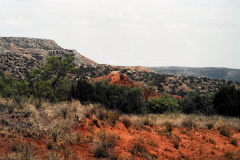 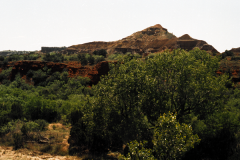 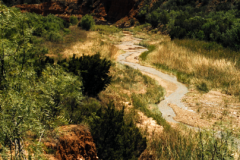 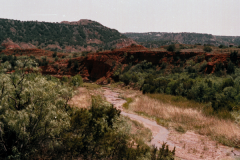 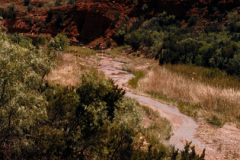 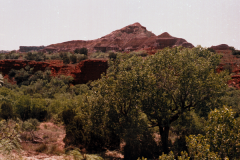 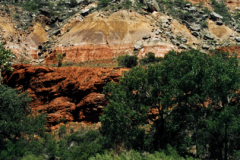 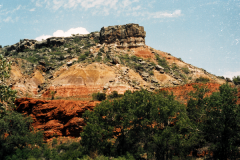 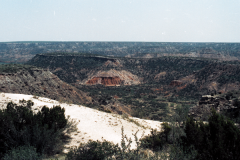 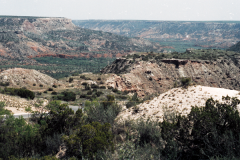 Palo Duro Canyon is a canyon system of the Caprock Escarpment located in the Texas Panhandle near the city of Amarillo, Texas, United States.[1] As the second largest canyon in the United States, it is roughly 60 mi (97 km) long and has an average width of 6 mi (9.7 km), but reaches a width of 20 mi (32 km) at places. Its depth is around 820 ft (250 m), but in some locations it can increase up to 997 ft (304 m). Palo Duro Canyon (from the Spanish meaning “hard wood”)[2] has been named “The Grand Canyon of Texas” both for its size and for its dramatic geological features, including the multicolored layers of rock and steep mesa walls similar to those in the Grand Canyon.

The canyon was formed by the Prairie Dog Town Fork of the Red River, which initially winds along the level surface of the Llano Estacado of West Texas, then suddenly and dramatically runs off the Caprock Escarpment. Water erosion over the millennia has shaped the canyon’s geological formations.

Notable canyon formations include caves and hoodoos. One of the best known and the major signature feature of the canyon is the Lighthouse Peak. A multiuse, six-mile round trip loop trail is dedicated to the formation. The middle portion of the trail can be hot with little shade, and hikers should take plenty of water.

The painter Georgia O’Keeffe, who lived in nearby Amarillo and Canyon early in the 20th century, wrote of the Palo Duro: “It is a burning, seething cauldron, filled with dramatic light and color.”

The second evidence of human habitation of the canyon dates back approximately 10,000–15,000 years, and it is believed to have been continuously inhabited to the present day. Native Americans were attracted to the water of the Prairie Dog Town Fork, Red River, as well as the consequent ample game, edible plants, and protection from weather the canyon provided.

The first European explorers to discover the canyon were members of the Coronado expedition, who visited the canyon in 1541. Apache Indians lived in Palo Duro at the time, but they were later displaced by Comanche and Kiowa tribes, who had the advantage of owning horses brought over by the Spanish. They had contact with traders, called Comancheros, in nearby New Mexico.

A United States military team under Captain Randolph B. Marcy mapped the canyon in 1852 during their search for the headwaters of the Red River. The land remained under American Indian control until a military expedition led by Colonel Ranald S. Mackenzie was sent in 1874 to remove the Indians to reservations in Oklahoma. The Mackenzie expedition captured about 1,200 of the Indians’ horses and destroyed them in nearby Tule Canyon. The Comanche and Kiowa conceded and left the area.

Through 2014, the Texas Department of Transportation is constructing bridges at Palo Duro over Water Crossings 1, 2, and 6 to allow motorists easier access during and after heavy rains. Paving work has been completed at the Juniper Multi-use Area, with the addition of utilities pending. By the spring of 2014, day-use campsites and a group pavilion will be added. Meanwhile, plans have begun to turn the Canoncita Ranch house located on the canyon edge into a research center.

The old Comanche Trail used by the Civilian Conservation Corps will be restored to extend from the Mack Dick Group Pavilion to Water Crossing 6. The trail will follow the base of Fortress Cliffs. Palo Duro also now offers driving tours in a 12-passenger van for interested sightseers.

Palo Duro Canyon itself was downcut by the Prairie Dog Town Fork tributary of the Red River, during the Pleistocene, when the whole region was uplifted. Most of the strata visible in the Canyon were deposited during the Permian and Triassic periods. From oldest to youngest, the formations are as follows: