The rock spires in the City of Rocks and adjacent Castle Rocks State Park are largely composed of granitic rock of the Oligocene Almo pluton and Archean Green Creek Complex.

The City of Rocks is a popular rock climbing area, with numerous traditional and bolt-protected routes. In the 1980s, it was home to some of the most difficult routes in the USA, mostly developed by Idaho climber Tony Yaniro.[citation needed] Climbers in the region refer to the area as simply ‘The City’.

California Trail wagon trains of the 1840s and 1850s left the Raft River valley and traveled through the area and over Granite Pass into Nevada. Names or initials of emigrants written in axle grease are still visible on Register Rock. Ruts from wagon wheels also can be seen in some of the rocks. 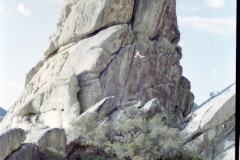 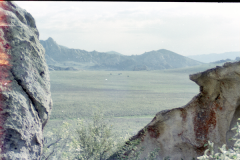 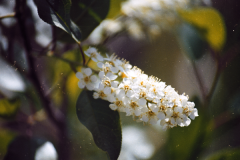 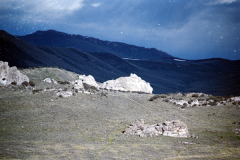 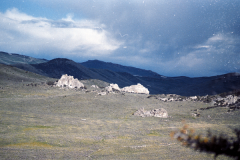 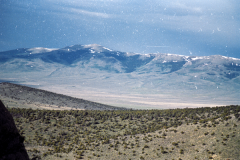 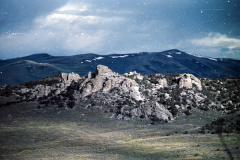 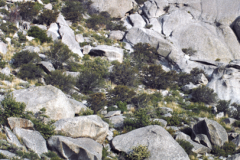 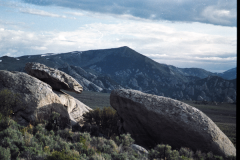 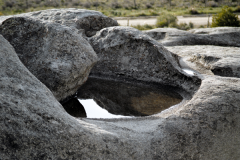 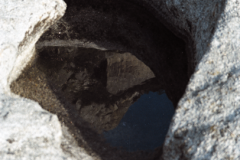 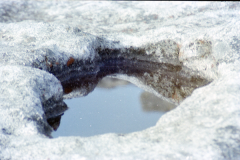 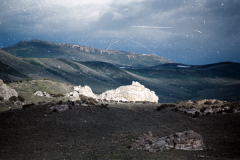 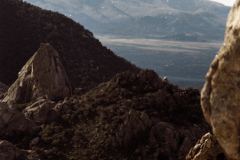 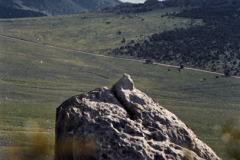 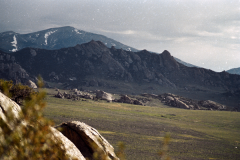 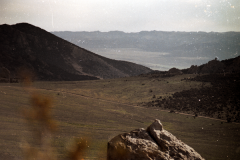 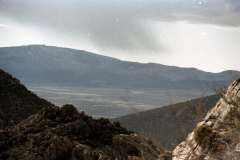 In 1849, an emigrant party with James Wilkins “encamped at the city of the rocks” on the California Trail just north of the Great Salt Lake Desert. Signatures in axle grease on rock faces can be seen today. One emigrant[who?] saw the distant rocks in August like “water thrown up into the air from numerous artificial hydrants.” Beginning in 1843, City of Rocks was a landmark for emigrants on the California Trail and Salt Lake Alternate Trail[3] and later on freight routes and the Kelton, Utah to Boise, Idaho stage route.

The area’s historical and geological values, scenery, and opportunities for recreation led to its designation as City of Rocks National Reserve in 1988. This unit of the National Park System is managed cooperatively by the National Park Service and the Idaho Department of Parks and Recreation.
Native American history[edit]

The Shoshone and Bannock tribes hunted the buffalo that once roamed in the City of Rocks area and gathered the nuts of the pinyon pine trees. The arrival of horses in the Americas in the 16th century and swelling European immigration disrupted the Shoshone-Bannock homelands and traditional way of life. They grew to resent the intruders but could do little to stop them. Most emigrants on the California Trail saw no Native Americans, but some of their journals record smoke rising from high hills and the surrounding mountains.

In 1826, Peter Skene Ogden and his Snake River brigade of beaver trappers were the first Euro-Americans to note the City of Rocks. Having few beaver, the area was ignored until 1843, when growing streams of wagons began flowing through the area in the summer.

After many attempts to find a wagon route to California early California settlers like Joseph B. Chiles and mountain men such as and Joseph R. Walker found the route up the Raft River, through the City of Rocks, over Granite Pass and down a series of streams like Goose creek and Thousand Springs to the Humboldt River. From the junction of the Humboldt near today’s Wells, Nevada they could follow the Humboldt west to the Sierra Nevada (U.S.) and on to California. Both Chiles, Walker and later John C. Fremont led settlers over this route. Later wagon parties seldom used guides but followed the tracks of the early pioneer’s wagons or the wagons in front of them. By 1850 so many people were on the trail that it it was often like a long traveling village crawling its way to California. Newspapers and independent publishers in the east or mid-west often published emigrant “guides” that could be bought for little money from several different authors by 1850. The City of Rocks and the nearby Granite Pass (Idaho) marked roughly half way to California for the emigrants and their loaded wagons.[4] By 1846, some emigrants headed for Oregon’s Willamette Valley also used this route as part of the Applegate Trail. This rugged cutoff was little used in later years.

In 1848 Samuel J. Hensley, a pioneer that accompanied Joseph B. Chiles in 1842, [3]:b[5] pioneered the Salt Lake Cutoff from Salt Lake City north of the Great Salt Lake when he traveled east while returning to Missouri. The Salt Lake cutoff rejoined the main California Trail near the City of Rocks.[6] Settlers using the Salt Lake Cutoff traveled about the same number of miles as settlers going by way of Fort Hall and west along the Snake River valley route. In 1852, some 52,000 people passed through the City of Rocks on their way to join the California Gold Rush.

When the California Trail was first opened in the 1843, Granite Pass, near City of Rocks provided the pass that allowed a “easy” connection with streams and creeks that provided the needed water and grass for their teams along the way between the Raft River and the Humboldt River. After 1850 the Pass initially became part of Utah Territory,[7] and in 1872 an Idaho-Utah boundary survey error establishing the Utah-Idaho boundary.[8] placed Granite Pass in Idaho Territory. With completion of the first transcontinental railroad in 9 May 1869, the overland wagon routes began to pass into history. However, wagons and stage lines saw continued use on regional supply routes that spread out from the railroad line to cities not on the railway line(s).

John Halley’s stage route connected the railroad (CPRR) station at Kelton, Utah, with Idaho’s mining hub of Boise, Idaho, and supplied the early economic development of Idaho, which won statehood in 1890. The Kelton stage route passed through the City of Rocks, with a stage station set up near the junction of the old California Trail and the Salt Lake Cutoff. Settlers began to homestead the City of Rocks area in the late 19th century. Dryland farming declined during the drought years of the 1920s and 1930s, but ranching survived. Livestock grazing began with early wagon use of the area in the mid-19th century and continues today.
Facts and designations

The Idaho Legislature declared Section 36 within City of Rocks as a state park under the jurisdiction of the Idaho Lands Board on February 27, 1957. In 1964, a much larger area was designated a national historic landmark. On March 15, 1973, Section 36 was transferred to the Idaho Department of Parks and Recreation from the Department of Lands. The following year, the area was designated a national natural landmark. The National Park Service studied the site in the 1970s and 80s as a proposed national monument.

City of Rocks National Reserve was created November 18, 1988 by Public Law 100-696, Arizona-Idaho Conservation Act of 1988. This Act drew a 22-mile (35 km) boundary around 14,407 acres (58.30 km2) owned or managed by the USDA Forest Service, Bureau of Land Management, Idaho Department of Parks and Recreation (IDPR), and private individuals. All lands owned by the United States within the Reserve boundaries were placed under the authority of the National Park Service (NPS). Between 1988 and 1996, the Reserve was co-managed by both NPS and IDPR. After the approval of a comprehensive management plan, the NPS officially transferred on-site management of the Reserve to IDPR on May 2, 1996. Today, the park functions under a unique cooperative agreement between the NPS and IDPR. Both agencies allocate partial funding to its operation. City of Rocks National Reserve is visited annually by over 80,000 visitors. The Reserve headquarters is located in the gateway community of Almo.
Environment

City of Rocks, an extraordinary encirclement of granite rising out of the gently rolling sagebrush country in south-central Idaho, has attracted and intrigued people since they first entered this region. The Shoshone camped here as did the emigrants traveling along the California Trail. One of the reserve’s most notable qualities is its large degree of biological diversity concentrated in a relatively small area. The great variety of textures, colors, and shapes in the natural landscape contributes considerably to the reserve’s scenic quality.

The landscape of City of Rocks has been sculpted from granite that was intruded into the crust during two widely spaced times. The granite that composes most of the spires is part of the 28 million year old Almo pluton. However, some of the spires are made of granite that is part of the 2.5 billion year old Green Creek Complex that contains some of the oldest rocks in the western United States. The granite has eroded into a fascinating assortment of shapes.

City of Rocks was designated a National Reserve, a unit of the National Park Service, in recognition of the nationally significant geological and scenic values of its rock formations and the historical significance of the California Trail. Rock formations in the reserve developed through an erosion process called exfoliation, during which thin rock plates and scales sloughed off along joints in the rocks. The joints, or fractures, resulted from the contraction of the granite as it cooled, from upward expansion of the granite as overlying materials were eroded away, and from regional tectonic stresses. The granite has eroded into a fascinating assortment of shapes as high as 600 feet (180 m). The upper surfaces of many of the rocks are covered with flat-floored weathering pits known as panholes. The most notable panhole is located on top of Bath Rock and is continuously filled with water from rain or snow melt.
Animals[edit]

Located in the Northern Basin and Range/Snake-Columbia shrub steppe ecoregions and the Raft Watershed[9] of the Upper Snake River Basin, the habitat of the reserve supports a large variety of mammals, birds, reptiles, and invertebrates.

* Amphibians – Common amphibians that could be found near water include Boreal Toad, Great Basin Spadefoot Toad, and Northern Leopard Frog.

* The Kruckeberg’s sword fern is found in the cool, moist micro-habitats in the granite formations. The fern grows in rock crevices and is normally found at higher elevations than City of Rocks. Primary threats to this species are trampling and or removal by visitors along rockclimbing routes.

* Stands of piñon/juniper woodlands are dominated by the single-leaf piñon pine and Utah juniper, interspersed with mountain big sagebrush and curl-leaf mountain mahogany. The pinon seed is edible and gathered by local residents. Higher slopes are covered with mountain big sagebrush, snowberry, serviceberry, and bitterbrush, with other shrubs, grasses, and herbs growing in the openings between shrubs. Groves of aspen, stands of douglas-fir and lodgepole pine, are located on the upper stony / grassy slopes of the reserve. Quaking aspen groves occur in canyons containing streams.

Other dominant plants in the City of Rocks National Reserve include:

The semi-arid climate is characterized by low to moderate precipitation, great extremes in both daily and seasonal temperatures, and low relative humidity. Average annual precipitation is approximately 14 inches (360 mm) at the lower elevations and 22 inches (560 mm) in the highest areas. Average snow depths for higher elevations range between 35 and 68 inches (1.7 m). Summers are hot and dry with occasional thunderstorms.

The reserve is in the southern part of the Albion Mountains, bordered on the east by the Raft River valley and to the north by the Snake River valley. Elevations rise from 5,650 feet (1,720 m) where Circle Creek meets the reserve boundary to 8,867 feet (2,703 m) at the top of Graham Peak to the north.

The majority of the soils in the reserve are composed of grus, a coarse angular sand derived from the disintegration of the underlying granitic bedrock. They are highly erodible. Soil erosion is greatest near roads and on steep slopes and intermittent stream channels. Erosion in these areas has formed deep gullies. Some of the exposed soil banks are over 8 feet (2.4 m) high.
Controversy[edit]

Climbing on the Twin Sisters, a major geological formation in the Reserve, was banned following a NPS decision and later court case involving the Access Fund. The Access Fund asserted that the NPS decision was “arbitrary and capricious,” while the NPS claimed that rock climbing on the Twin Sisters disrupted the “historic viewshed” of the California Trail.