Two more miles takes us to Anticline Overlook for the most sublime views in this part of the area. To the north (fig. 30) we look across the northeast flank of the Cane Creek anticline, an upfold of the rocks (figs. 13, 14). Hurrah Pass straddles the narrow wall separating the Colorado River and its canyon at the left from Kane Springs Canyon on the right. The Colorado River appears again in the right background, where it leaves Moab Valley. The Kings Bottom syncline, or downfold (fig. 26), seen in the middle distance between the Cane Creek anticline and the Moab anticline, exposes a wide area of the Navajo Sandstone. The ridge on the right skyline, composed of the Entrada Sandstone, is The Windows Section of Arches National Park, and the left skyline shows faintly the distant Book Cliffs.
On the east wall of Kane Springs Canyon just to the right of figure 30 is the Atomic King mine in the Cutler Formation, from which uranium ore has been mined at intervals during the last 2 or 3 years.
LOOKING NORTH FROM ANTICLINE OVERLOOK, across axis of Cane Creek anticline. Unimproved road crosses Hurrah Pass in foreground. Colorado River at left is near Potash and in right background is at Moab. 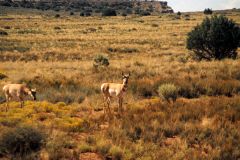 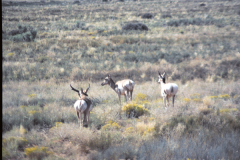 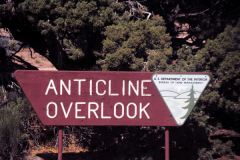 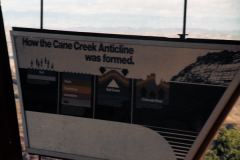 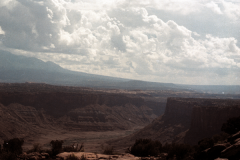 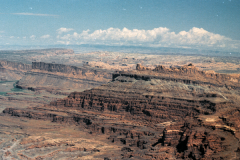 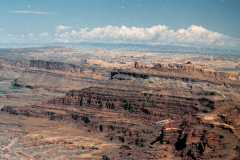 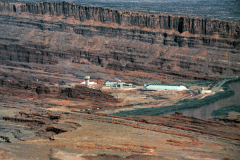 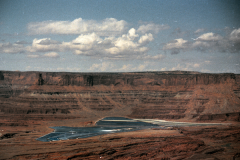 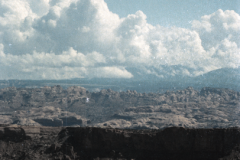 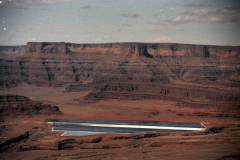 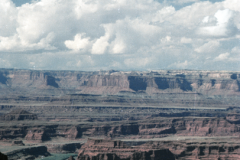 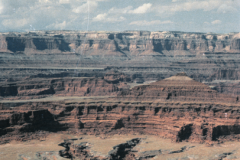 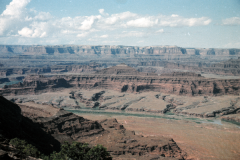 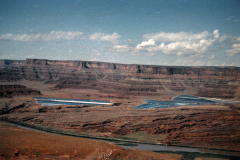 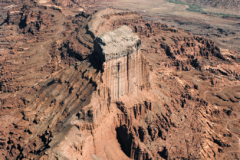 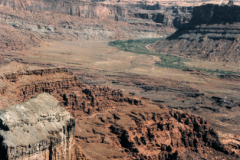 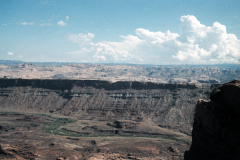 To the northwest (fig. 31; see also fig. 13) is a textbook example of a rock fold—the Cane Creek anticline—laid bare by the Colorado River cutting directly across its crest (fig. 1). Anticlines are noted as sources of or at least hunting grounds for oil and gas, and this one is no exception, although production has been relatively small and was stopped altogether in about 1963. Some oil and gas was produced also from wells on the north flank of Shafer dome, just beneath Dead Horse Point (figs. 1, 15), but other favorable-looking structures farther south that were tested, such as Lockhart anticline, Rustler dome, and Gibson dome (fig. 1), failed to yield commercial amounts (Baker, 1933, p. 80-84). Some of the colorful events in the early days of wildcatting are noted on page 100.

Exploration for oil and gas led to the discovery of potash beneath several anticlines in eastern Utah and western Colorado. According to Hite (1968, p. 325), the Cane Creek anticline is underlain by about 5,200 feet of salt-bearing rocks in the Paradox Member of the Hermosa Formation (fig. 9), of which about 84 percent is halite (common salt, sodium chloride) and associated potash salts (sylvite, potassium chloride). The potash mine of Texas Gulf, Inc., is shown at the right in figure 31 The white area to the left of the mine is waste common salt, which is recovered with the potash salts, and the white area with dark stripes at the left is a small part of more than 400 acres of evaporation ponds built to separate the salts. These ponds also can be seen from Dead Horse Point. The dark stripes are the visible parts of plastic membranes lining the ponds. Mining of an 11-foot bed of ore began by usual underground methods from the bottom of a shaft 2,788 feet deep but became too difficult because of intense and intricate folding of the salt beds. Now the salts are being extracted by a method involving solution, wherein river water is introduced into the former workings and allowed to stand long enough to dissolve the salts, then the brine is pumped out to evaporation ponds, and the valuable potash salts are separated from the sodium salts. Closeup views of the mine and evaporation ponds are seen in figures 70 and 71.
CANE CREEK ANTICLINE, looking northwest from Anticline Overlook. Colorado River is cutting into limestone of unnamed upper member of Hermosa Formation in lower bench at crest of fold; Rico Formation, with bluish-white Shafer limestone at top, forms upper curved bench; remainder of formations are as given in caption for figure 29. Potash mine (right) and evaporation ponds (left) are operated by Texas Gulf, Inc. Merrimac and Monitor Buttes on right skyline are shown in figure 12. (Fig. 31)

As noted earlier, most of the readily recognizable thin beds, such as the White Rim Sandstone, pinch out south of here, and figure 31 marks the northeasternmost exposure of the Shafer limestone at the top of the Rico Formation. Northeast from here the Rico and overlying Cutler Formation are not readily separable and are included in the so-called Cutler Formation undifferentiated. This land-laid unit of red sandstone, siltstone, and shale is as much as 8,000 feet thick just southwest of the ancient Uncompahgre highland (present Uncompahgre Plateau, in western Colorado and eastern Utah), from which it was derived by erosion during the Permian Period (fig. 80).