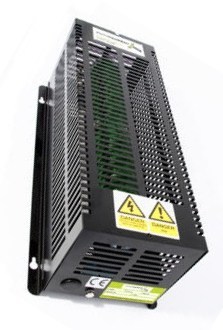 The following treatise is taken directly from Solar Homestead at http://solarhomestead.com/dump-loads-for-solar-wind-and-microhydro/.

Would you do us a huge favor by sharing?
Dump loads a.k.a. diversion loads are are an important part of the off grid electric system.

As we discussed in the dump load intro, a dump load is simply an electrical device (load) to send electricity to when the batteries are full or the extra power is not required.

Solar panels are unique in that they can be short circuited (positive and negative connected) or disconnected (positive and negative open circuited) without any issue. If your batteries are full and the solar modules are still making power, you can simply short circuit (not so common) or disconnect the solar modules from your batteries with a charge controller.

Wind turbines and water turbines generate electricity by rotating and need to have a load on them at all time. Without a load (such as a battery or a dump load) they will over-speed and possibly be damaged. Water turbines will generally turn 3 to 4 times as fast without a load while it can vary greatly with wind turbines as the wind speed changes.

The best dump loads are made from resistive loads such as air heaters or water heater elements. Resistive loads like previously mentioned are:

Incandescent light bulbs are not suitable for dump/diversion loads. Although you may have seen them used in the past think about this. Your system is working smoothly and you have 10 x 100 watt light bulbs as a dump load. On a bright sunny day your system is dumping 1000 watts into your light bulbs and one of them burns out. Oh no, now your dump load is only 900 watts and the voltage starts to climb.

As the voltage starts to climb, the bulbs will actually consume the 1000 watts or more. When the bulb went out, the resistance dropped. Now the bulbs are operating above their rating and the second one burns out. Within minutes they will all burn out leaving your battery bank at the mercy of your system.

A second and often overlooked problem with the standard tungsten incandescent bulb is the fact that the resistance of the bulb’s element changes rapidly as the bulb heats up. In fact the resistance will increase by 15-20 times from cold to hot.

A cold 100 watt 120 volt tungsten light bulb has a resistance of about 9.5 ohms while the same bulb has 144 ohms of resistance when hot or in about 1/10th of a second.

You can use an AC air heater or water heating element for your DC dump load but the element will not dump as much power as you might think. Click here to learn about using off the shelf AC elements as a dump load. 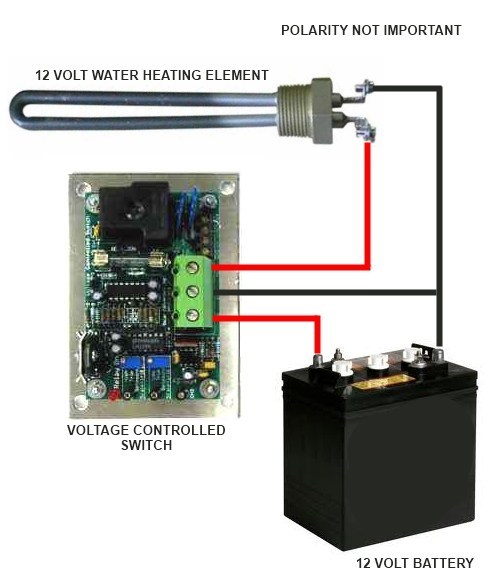 DC current is very difficult to regulate. You can change the power out easily in AC current by using something as simple as a dimmer switch. DC is not that simple. It can only be on full or off full without expensive equipment.

Then how can we regulate (and hold the voltage steady) DC current for our dump load?

The answer is pulse width modulation or PWM. Don’t worry PWM is not really that complicated.

Let’s pretend we have a 200 watt air heater but we only want to dump watt 100 watts. All we need to do is make sure the 200 watt dump load is only connected 50% of the time. If we connected the load for one second and disconnected it for one second it would only use half of the 200 watts (100 watts). This is all PWM is. Pulse width modulation turns the load on and off many times per second. The more power that needs to be dumped, the more on cycles there are. The less power that needs to be dumped the less “on” cycles there. Of course these cycles are so fast you will not be able to keep track or count.

Below you will see the most common way to install a PWM dump load. 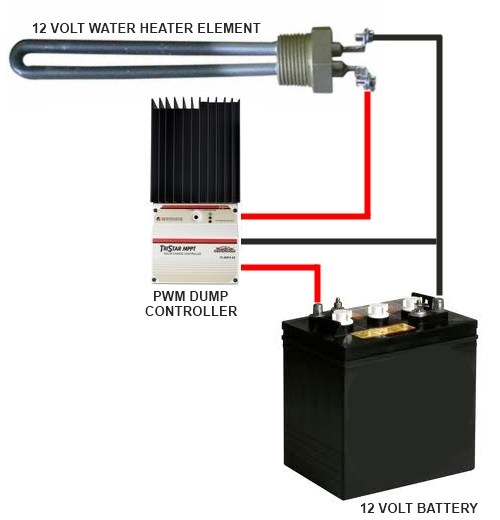 We do not show the solar panels, micro hydro turbine or wind turbine on purpose. You need to treat the dump load circuit as a completely independent system. Every item you add to your system should be treated independently.

It can be very confusing if you start thinking about installing a wind turbine, a solar array and a water turbine on the same battery bank. But, if you treat each as an independent system you can just think about one step at a time.

Another option for a dump load circuit is to use one of the programmable auxiliary outputs from either your inverter, charge controller or battery monitoring system. Here is an example below: 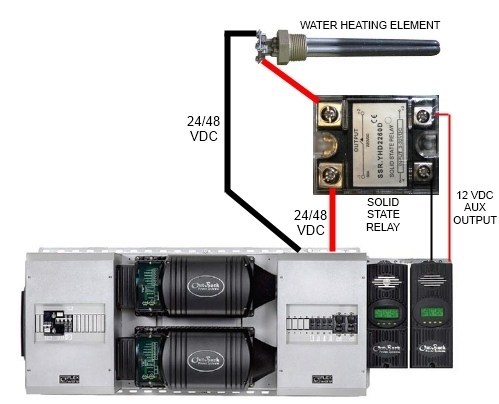 Most of the high end inverters and charge controllers made by Outback, Xantrex, Midnite Solar, Apollo Solar and Magnum Energy include an AUX OUTPUT relay driver. This relay driver is a programmable 12 volt circuit. You can tell it what voltage to dump and it sends a 12 volt output to operate a solid state relay which turns the dump load on and off.

You MUST use a solid state relay if you want to use the PWM dump mode. A standard relay will not handle the many on and off cycles per second. Make sure you take advantage of the PWM setting on your AUX OUTPUT relay driver. Some are labeled “dump load using SSR” and some are labeled “Pulse Width Modulated” in the menu of the charge controller.

There are many other ways to make your diversion load circuit. The one’s listed above are the common methods. If there is a method we have missed and you think we should add it, let us know in the comment section below.

You can make your dump load to divert AC current instead of DC and use a standard AC heating element. The only problem with dumping AC current is if there was an inverter failure. If the inverter were to shut down for any reason, your dump load would not work. It can done, but it is more risky than using DC.

One last IMPORTANT thing to remember.

Your dump load (diversion load) controller or solid state relay must be sized large enough to handle the full wattage of your dump load.

THIS CANNOT BE OVERSTATED!

YOUR DUMP CONTROLLER OR SSR OR STANDARD RELAY MUST BE SIZED ACCORDING TO THE SIZE OF THE DUMP LOAD AND NOT THE MAXIMUM AMOUNT OF POWER THAT WILL NEED TO BE DUMPED!

When the dump load is turned on (even if it is only a fraction of a second) it is consuming the full rating of the dump load. It has nothing to do with the charging capacity of the solar modules, wind turbine or water turbine. Please keep this in mind when sizing the dump controller or relay, wiring and over-current protection such as fuses or circuit breakers.

Even though our turbine can only produce 500 watts or 17 amps and the most we will ever need to dump is 17 amps we MUST size or dump controller or relays at the amperage of the dump load, 33 amps in our example.