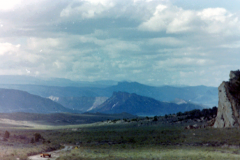 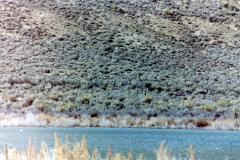 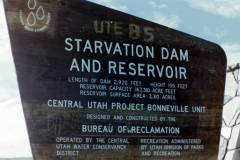 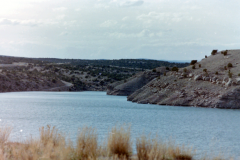 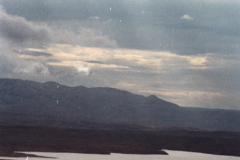 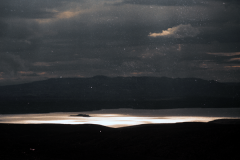 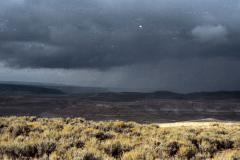 The reservoir, fed by the waters of the Green River, is 91 miles long with approximately 375 miles of shoreline ranging from low flats to cliffs more than 1,500 feet high.

Flaming Gorge has become nationally known as the “fishing hot spot” of America. The reservoir offers quality trout fishing year ’round. A fishing license from either Wyoming or Utah is required, and a special-use stamp is available for fishing both states.

Huge boat launching ramps, located close to campgrounds, are provided at convenient access points along both sides of the reservoir. Boat rentals, marina supplies and food are available at Buckboard Crossing and Lucerne Valley. Kaleidoscopic better defines the awesome coloration of this desert/reservoir area, for it is truly a land of living color with the many rock formations sculptured through the centuries by wind and water, changing colors and perspective with the varying sun.

One of the most awe-inspiring scenes in the region is Firehole Canyon, south of Rock Springs off US Highway 191. The canyon features chimneys and pinnacles reflecting in the blue water of the reservoir.
Red Canyon Vista and Visitor Center

A major attraction in the Flaming Gorge National Recreation Area is the Red Canyon Vista and Visitor Center. Tourists may travel around the recreation area on a loop road. Highways, WYO 530, US 191 and Utah State Highway 44, connect to offer a complete loop from Interstate 80. The Red Canyon Vista and Visitor Center can be found a short distance from the highway on a spur road. Red Canyon is situated seven miles south of the Wyoming border, but the geographic center of the new 160 mile loop drive is in Wyoming. Travelers may approach the belt tour from either WYO 530 south of Green River, from US 191 west of Rock Springs, or from WYO 414 southeast of Fort Bridger.

History of the Flaming Gorge Area

Petroglyphs have been found, giving evidence that American Indians lived in, or passed through, the area hundreds of years before the first Europeans arrived. To these natives, the Green River was known as the Seeds-ka-dee-a, the Crow Indian word meaning prairie hen.

Prior to 1848, part of the Flaming Gorge area in Wyoming belonged to Mexico, but was annexed to the United States after the Mexican War. Other parts of the area have been claimed, at one time or another, by France, Spain, Britain, Mexico, the early state of California and the Mormon state of Deseret. John Wesley Powell, a one-armed Army major and professor, mapped the area initially and named Flaming Gorge and other land features on his way down the Green and Colorado Rivers in 1869 and 1871.
Geological Formations

The entire region is fascinating to both the amateur and serious geologist. The sedimentary rock formations of the Flaming Gorge area resemble layers of a cake, one stratum upon another. The formations accumulated from silt and mud on the bottom of a great fresh-water lake, which occupied much of what is now Wyoming during the early Tertiary period, some 40 million years ago. Fossils of flora and fauna from these prehistoric times are frequently found in the area.

The Flaming Gorge NRA is located in the northeast corner of Utah and the southwest corner of Wyoming. It is South of I-80, between Green River and Rock Springs, Wyoming and extends into the Uintah Mountains towards Vernal, Utah. The area is a mixture of climate, topography, and recreation opportunities well suited to a variety of summer and winter interests.

With 43 campgrounds hosting over 700 individual campsites and 27 group sites, all spread over nearly 91 water-miles (with a whopping 360 miles of shore line) plus countless mountain retreats. There is plenty of room for everyone. There is also the opportunity to set up “primitive” camping for those wishing a more secluded adventure, or river camps for those extending their river runs for more than a day. Close at hand are the quaint communities of Manila and Dutch John, Utah to offer accommodations and other services for more traditional vacationers.

Consult the monthly calendar of events posted on the web or in the district office of the National Forest in Manila, Utah and at the Red Canyon Visitor’s Center for scheduled activities, classes of interest, and special events.

The reservoir is mainly in southwest Wyoming and partially in northeastern Utah. The northern tip of the reservoir is just 10 miles (16 km) southeast of Green River, Wyoming, 14 mi (23 km) southwest of Rock Springs, Wyoming, and 43 miles (69 km) north of Vernal, Utah. The lake straddles the Utah-Wyoming border. The nearby town of Dutch John, Utah, was built to serve as a base camp during construction of the dam, and as an administrative site afterwards.
Geology[edit]

The foundation of the reservoir is a steep-sided narrow canyon composed of siliceous sandstone and hard quartzites inter-bedded with softer shales, siltstones, and argillites. About 1.5 miles (2.4 km) east of the dam, a road cut has revealed a fault scarp on the southbound side with about 9 feet (3 m) of slippage.
Recreation[edit]