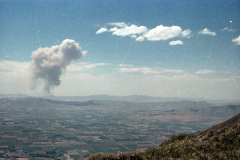 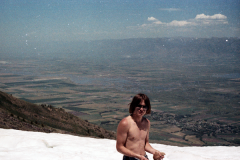 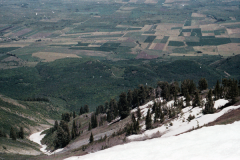 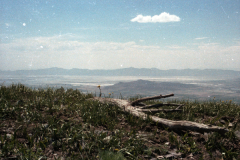 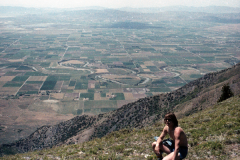 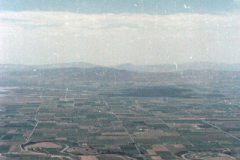 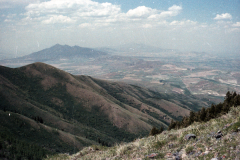 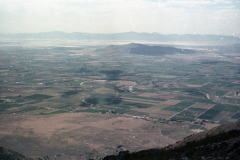 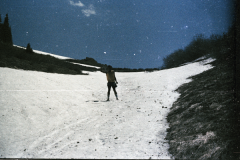 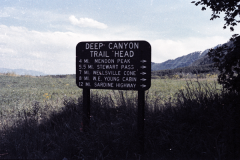 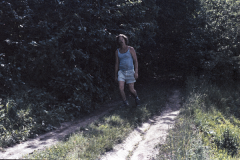 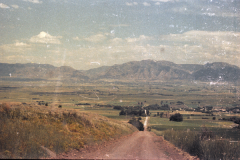 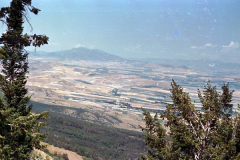 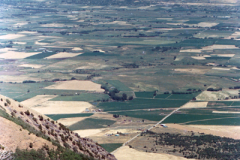 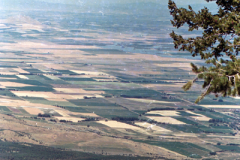 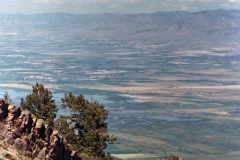 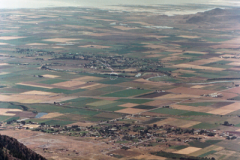 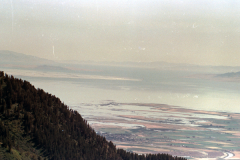 The United States Congress designated the Wellsville Mountain Wilderness in 1984 and it now has a total of 20,988 acres. The Wellsville Mountain Wilderness extends along the high steep north-south ridge and both sides of the Wellsville Mountains for about 14 miles. It is located in Northern Utah southwest of Logan, Utah and encompasses extremely rugged and picturesque terrain. The mountains are one of the narrowest and steepest ranges in the Rockies, averaging only about five miles wide at its base and rising to its tallest summits, Wellsville Cone at 9,356 feet and Box Elder Peak at 9,372 feet. Canyons cut into the mountains from the east and west. The water that runs out of the Wellsvilles is enough to supply many small Utah communities. The wilderness supports populations of deer, moose, and mountain lions, not to mention the occasional bighorn sheep. Raptors use this mountain range as a major flyway.

Day hikers and hunters are the primary human users. There are only 3 system trails totaling approximately 17 miles that exist in the Wellsville Mountain Wilderness.

The West side of the range is characterized by a drier climate and rockier terrain. It is quite similar to the Wasatch Front East of Perry, and Willard, Utah, near Ben Lomond Peak. The East Side rises from the floor of Cache Valley and is more heavily forested. Even though there are more trees on this side the range is still quite barren of trees as a whole.

The majority of the trees in this range are Big Tooth Maples, followed by pine at higher elevations, and a few aspen here and there. Because of the abundance of Maple trees the Wellsvilles are home to some of the most spectacular fall colors found in Northern Utah.

The Wellsvilles get their name from Wellsville, Utah in the Southwestern corner of Cach Valley. Wellsville, settled in 1856, was the first settlement in Cache Valley and Cache County. It is never very crowded as it is not a well known wilderness area. As it is in a major migration route of birds of prey there is also a bird watching group that maintians a bird watching site near the top of the mountains.

A moderate hike through a portion of the Wellsville Mountains that will give you spectacular views of the Cache Valley, Idaho, and the Great Salt Lake.

Mendon Peak is named for the small town that sits at its base. this is the northernmost major peak in the Wellsvilles and is at the extreme North end of the main ridge. It can be accessed from the Maple Bench trailhead or from the Deep Canyon trailhead. The climb is shorter but steeper from Maple Bench.

Scout Peak 8,687 ft.
This peak sits just south of Mendon Peak and is not very prominant. It appears to be more of a point along the massive Wellsville ridge. It is nevertheless the 4th highest peak in the range. It is best accessed from the Maple Bench trailhead.

Getting There
Highway 89 runs along the East and South sides of the Range from Logan to Brigham City. It enters Wellsville Canyon on the East side and runs South to Mantua, Utah, and then West through Box Elder Canyon to Brigham City.

There is limited access from the West of the range so the best way to get anywhere is from the Cache Valley side. I-15 runs along the Western side and there is only one trailhead in Coldwater Canyon, just East of Crystal Springs. There are 3 other trailheads located on the Southeast, East, and Northeast sides of the Range. On the Southeast, Rattlesnake trailhead is just off highway 89 at the top of Wellsville Canyon. It provides the best access to Box Elder Peak and Wellsville Cone. Just South of Mendon, Utah, on the East side of the range, is the Maple Bench trailhead. It provies access to the main ridge at Stwart Pass (8,376 ft.), Scout Peak (8,687ft.), and Mendon Peak (8,766 ft.). On the Northeastern side of the Range (Just North of Mendon, Utah) is the Deep Canyon trailhead. It is the Northernmost trailhead and provides access to Deep Canyon, as well as the main ridge and Mendon Peak. It is probably the smoothest trail with the least abrubt elevation gain.

The majority of the range is a wilderness area so no motorized transportation is permitted. There is a limit of no more than 10 people for overnight backcountry groups. Camping is not permitted within 200 ft. of any body of water. It is also illegal to dispose of any garbage in the wilderness so if you pack it in you must pack it out. Camping for more than 3 nights in the same place is also not permitted. Basically, Leave No Trace principles must be followed.

The range is administered by the Wasatch-Cache national Forest.

Camping
There are only 2 established campgrounds in the range. The Box Elder Campground is on the South end of the range and is just outside of the town of Mantua. The other campground is the Maple Rise Campground on the East side between Wellsville and Mendon. Camping is permitted as long as you follow Leave No Trace principles.

The Wellsville Ridge is very well known among Utah’s bird watchers. It is probably the best place in the state to see such birds of prey as the Cooper’s hawk and the red tailed hawk. These raptors are especially prevalent on windy days during the fall migration, when they can be seen riding the updrafts along the western side of the ridge. There are also a number of fine views from the top of the narrow summit ridge. The fertile Cache Valley lies below the mountains on the east side, with its settlements of Logan, Mendon, and Wellsville. On the west side the meandering Bear River makes an interesting picture, as it winds its way lazily toward the Great Salt Lake.
The people who live below the Wellsville Mountains should be remembered for their valiant efforts in the early 1940s to save their beloved mountains. At that time the grass-covered ridges were suffering from decades of overgrazing, and much of the vegetation in the lower canyons had been burned out. In 1941 a few concerned citizens in Cache County formed the Wellsville Area Project Corporation, and soon, even as the United States was becoming embroiled in World War II, private contributions to save the mountain began to accumulate. The money was used to purchase land, which was then deeded over to the Forest Service for protection. The Wellsville project was a huge success, and in 1984 a final tribute to its participants was paid by the U.S. Congress with the creation of the Wellsville Mountains Wilderness Area. These 23,850 acres of wilderness stand today as a monument to a group of people who, fifty years ago, cared about their environment and their children’s heritage.

Deep Canyon Trail – From the trailhead the trail climbs steadily up Deep Canyon for a distance of 3.2 miles, finally reaching a small saddle on the summit ridge after an elevation gain of 2,700 feet. The trail splits at the saddle, with the southern branch going to Stewart Pass and the northern branch proceeding along the ridge to the top of a small unnamed peak 0.7 mile away. This peak is supposed to be an especially fine place to watch the hawks, but in fact if the conditions are right they can be seen almost everywhere along the ridge. The best time to see the hawks is during the fall migration on days when there is enough wind to create good updrafts on the western side of the mountain.

The Wellsville Ridge is surprisingly devoid of vegetation. Perhaps the dry winds that blow across the mountain from the Great Basin desert leave the rocky soil too dry for the forest to flourish. Whatever the reason, the absence of trees along the ridge makes for some marvelous views of the valleys below.

From the saddle above Deep Canyon the main trail proceeds southward for 1.7 miles to Stewart Pass. Along the way the route traverses around the west side of Scout Peak (8,687 ft.), another good place for hawk watching. There are no signs to let you know when you arrive at Stewart Pass, but there is a stone monument marking the place. This is where the ridge trail intersects the Coldwater Canyon Trail, and where you must start your descent back to your shuttle car. Stewart Pass is the lowest point on the Wellsville Ridge between Scout Peak and the Wellsville Cone.

The hike down through Coldwater Canyon is much like the hike through Deep Canyon, except the trail is slightly steeper. You will loose 2,500 feet in 2.6 miles. About 0.6 mile before you reach the trailhead you will pass by Coldwater Lake, a small pond about 100 feet long.

Wellsville Cone
If time permits, you really should make a side trip to the top of the Wellsville Cone before starting down the Coldwater Canyon Trail from Stewart Pass. The Wellsville Cone is 1.6 miles from Stewart Pass, over an excellent trail, with an elevation gain of 980 feet. The side trip to Wellsville Cone and back will add about 2.5 hours onto your total hiking time. The Cone, which can be clearly seen from the top of Stewart Pass, looks like an old volcanic cinder cone with its northern side eroded away. The mountain is made of sedimentary limestone, however, so the cone could not have been formed by a volcano. The Cone has two summits with the eastern peak being the higher one. The ridge trail passes between the two peaks. You will probably see another faint trail coming up through the bowl below Wellsville Cone on the west side of the mountain. This trail originates at the bottom of West Coldwater Canyon, but it is little used now and hard to follow. For still more ambitious hikers it is only another 0.9 miles from the Wellsville Cone along the last part of the ridge to Box Elder Peak (9,372 ft.). Box Elder is the highest point in the Wellsville Mountains, but the views are not much different than the views from the summit of the Wellsville Cone.

The question arose. Were we ready for what was about to happen? That answer naturally enough was NO! We were relaxing on the ridge when, on the east side I could feel a rumbling in the ground. At the same time one of the other hikers was yelling in a near panic to come see what he was seeing on the west side. We had no idea what was going on. Looking west, out over the Bear River area we saw these clouds rise up and drift north into Idaho. We had no way to find out what had been until we came down the mountain.

So what was the hoopla? Once we got back to Logan we learned that Morton Thiokol had just tested the original Space Shuttle engine. They were located near Tremonton, Utah and fired the 2 million horsepower engine while we were on the Wellsville ridge.

The cloud that has a different look and shape in these pictures was the product of that test. This series of pictures was taken with film and was at the end of one roll and beginning of another, making for the pink spots in the pictures. Typical for film. 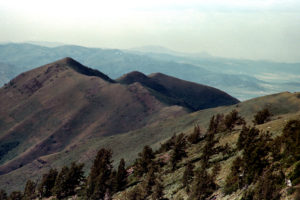 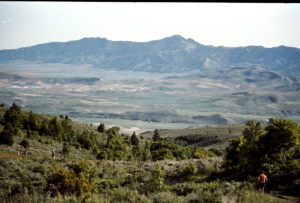 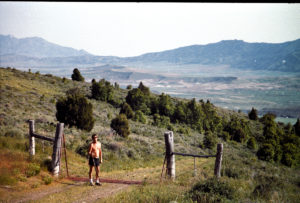 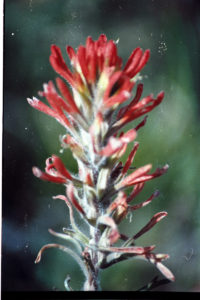 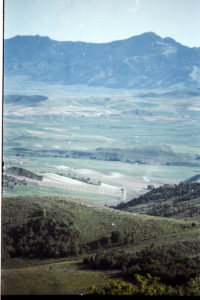 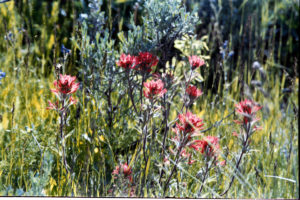 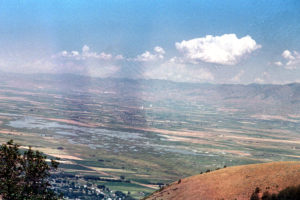 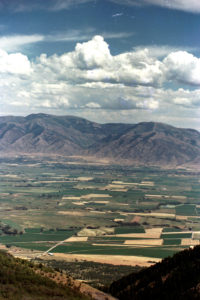 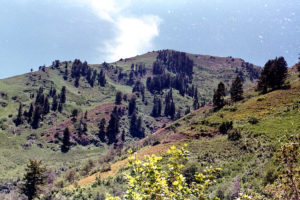 Views looking off the top of the ridge in each direction. On the left, looking east, is Cache County. On the right, looking west, the Bear River and area northwest of Salt Lake City. 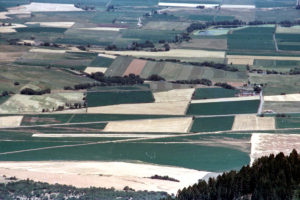 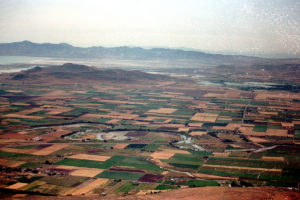 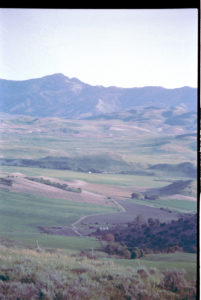